Last night, I drove to Sarah’s place with Liam to finish up honey pot. We had one last thing to do: synchronize images and music. In the car, Liam gave me some tips for the following project: use a thing called ‘timecode’ earlier in the process, and have someone fully responsible for all the sound editing. I guess I hadn’t thought much about the technicalities of sound mastering, being a novice in the field, and shooting a silent movie; but I will definitely need someone to work on that for the next project.
Fortunately, synchronizing was quick – in about fifteen minutes, images and music were aligned. But I hadn’t anticipated exporting. The final cut files need converting to another format – options are infinite, with room for error in the choice of resolution, frequency, colour, and other parameters no-one seems to really understand. We tried, and failed, a couple of times – each tentative taking five to fifteen minutes of loading. And once we had four files in a format that could work, Sarah couldn’t copy them onto my PC-formatted hard-drive (they were too big, Nghi later discovered), so we spent more time re-formatting it for Mac. Only to find out, a couple of days later, on Nghi’s computer, that we still didn’t have the right format.
Digital work is wonderful, for the freedom it allows – so much footage, at no added cost, and immense editing capacity on a desktop. But how frustrating are these technical details, and the sheer time of conversion and copying! At least, we didn’t have a pressing timeline to add stress; and now, the product is finished.

Honey pot is about guys dancing tango in a public toilet. We always needed good music – at least, music – for that scene; and preferably for the whole movie, since we’ve got no dialogue.
Things started on a wrong foot: our first composer dropped out – after initial agreement, ahe said he was overworked, and wanted to pass. Then I met a great guy called Misha Doumnov through Naomi; but he only composes acoustics and works to very high standards, which comes with a cost that we couldn’t afford in our budget. I was getting a bit sour, when I met Liam.
Liam had worked with Joy before on Channel 31, and is finishing a degree in music. He’s been composing stuff for a long time, and he was very keen to get some film experience. As far as musos go, Liam is as good as it gets: he only missed an appointment once, returns a majority of calls, and comes just fifteen to twenty minutes late. More important, he actually does cool stuff, and runs around asking everyone for feedback and advice. He’s not one of these genius composer types that won’t have their baby messed with; which makes him a wonderful guy to work with.
The first week, he sent me drafts – themes he might use, ideas. There were things I liked others I didn’t. He didn’t get offended, on the contrary, took in the feedback, adapted, expanded, and together, we got something we were both happy with.
He did everything on computer, one of these magic software things with thousands of digitalized instruments. I went over to his place one afternoon to fine-tune stuff, and suggested having an Asian flute-like instrument for one of the melodic lines. He clicked on something, and a dozen options appeared for Indian and Chinese flutes.
I was also not completely happy with the music for the last scene. It transitioned abruptly from hectic electro-tango to sugar-sweet romantic. I suggested an idea for transition: slightly before Matthew falls, to reinsert a trip hop bass line that was there before, and to play the romantic theme on the strings over it. We tried, and suddenly, it sounded like one of Aphex Twin’s early compositions. I loved it – it brought a new depth to that last bit, with a sexual throb underlying the sweetness of the failed kiss.
I let Liam play with it some more, he went around, consulted friends, and in the end, he delivered a piece of music much better than what I hoped for when I started the project.

Everyone’s been working hard on this project, and they need proper acknowledgements. But how I wish credits would generate themselves! Instead, a series of emails, back and forth, to check spellings of names, and how to label everyone’s role, and half an hour with Nghi deciding on order and size. Still then, more decisions to make ‘what font?’, Sarah asked – a legitimate question, but isn’t there a standard? I spent another half hour on Microsoft Word, comparing fonts, and on Wikipedia, learning about serifs and sans-serifs, eventually settling for Sylvaen, a variation on Garamonds, palatines and times new roman. Then I left everything to Sarah, who magically generated the credit sequence on final cut.

I knew when I saw Sarah’s profile that I would want to work with her. A film editor with a martial arts background, interested in Japanese animation: she was perfect on paper – she was better live: a lovely lively young woman, with a quirky side smile, and a very pleasant enthusiasm.
I met her a couple of times in the city to discuss what I wanted and give her the files, but I let her do the work on her own. A few weeks later, I went over to her place in Taylor’s Lake. She picked me up in front of a gym – appropriate – and drove me to her house. I was very impressed by her edit. Longer than I thought, elegant, smooth. I gave her some feedback – first scene too fast, second scene too long, a of the dance sequence out of frame, and a red cable appearing on the take she’d chosen for the last scene. But overall, I was very happy with her work. After that afternoon, we only backed and forth twice before I was fully satisfied.
But she was not over then: she was going to supervise the colour grading - the complex technical task of unifying colours, contrast and lighting levels. And there was work to do: the urinal scene was too bright, and the colour of the walls in the dance scene varied from light pink to greenish. I’m still surprised at her enthusiasm for that kind of technical work, but she did beautifully. She came to my place this time to show me the result of her first go, and I had very little to feedback on – too much light still in the urinal scene, and a weirdly pink sequence when the two men do their swan kiss, that was about it.

It's a tradition to organize a wrap up party to celebrate the end of a project. This one was a bit of a challenge. Everyone is very flexible and motivated actually getting work done. But when it’s a fun come together, things become sloppier – delays in emails, mother’s day plans, other appointments, etc. Understandable; when we were working, I was not going to hear excuses of ‘oh, but I’ve got a wrap up party for a previous project to attend.’
In the end, we found a date – Sunday 16th evening. Now I had to find a venue. There were a few constraints. It had to be close to my place, because we would all meet there first for drinks and showing the first edit. And it needed a table for 12. And our budget was not unlimited. And it was to be not too spicy, no seafood, and no dairy. Nghi suggested Japanese tapas on Bourke Street. He wanted Sake.
I looked at three places near the corner of Bourke and Russell. In the end, we went to White Tomatoes, Korean Barbecue. The Japanese tapas opposite were not open on Sunday; the idea of Shabu shabu down a laneway did not elicit high enthusiasm. Not the absolute best ever, but we had a nice evening, and eating barbecue was entertaining.
The main objective had been, show everyone our film, how nicely it all came together. I think everyone was pleased. Upon leaving, Nghi and I even hugged. He must have been happy; maybe the sake played a role. 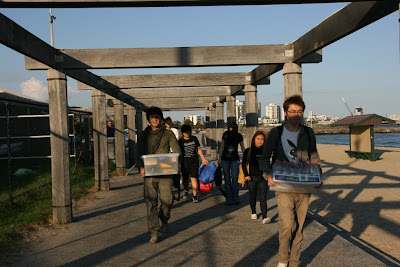 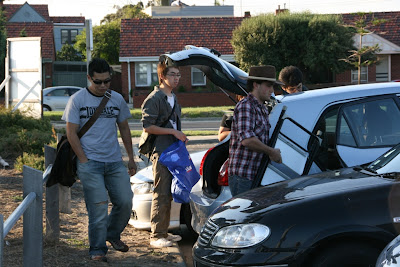