The central part of the film was a dance sequence. During the dance, roles and balances were inverted, psychologies revealed, and power exposed. In theory, that was all very nice. I have no experience in choreography, neither have Joy or Nghi. So we recruited a choreographer, on starnow. Two people answered our call, but Flic was a clear favorite from the start. She had recently arrived in Melbourne, and I felt she would soon be a star on the scene. She exuded professionalism, sympathy, clarity, something warm, efficient, and passionate.

I called her after a week and another interview, just in case, to confirm that we would collaborate. Enthusiasm on both parts. I quickly ran through the idea again in a mail - how the dance evolved, and what it had to achieve. And then we organized a meeting, one morning, to run through it. 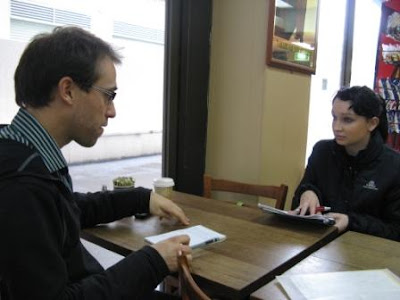 I arrived at a random cafe down an office building on Queen's road with Joy. Flic was giving a class there afterwards, and had asked us to come and meet her there. She was extremely busy, but willing to see us all the same. I immediately liked her for that. She quickly exposed her ideas about the dance sequence. It was in line with what I wanted. Tango inspired footwork, entangled arms, torso pushing, a mock-fall, a chase. We sectioned our minute of 'dancing-fighting' into 6 units of ten seconds approximately, with a focus on heads, or legs, or arms, or torsos in each of them.

And then Flic ran off to her dance class, while Joy and I tramed back to our respective jobs in the city. Relieved, happy, thrilled! We knew where we were going now; and knew Flic would take us there. 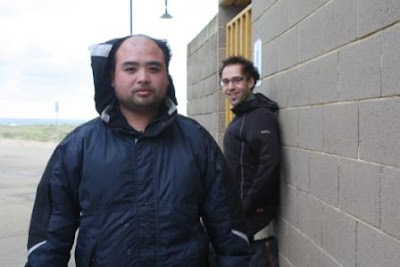 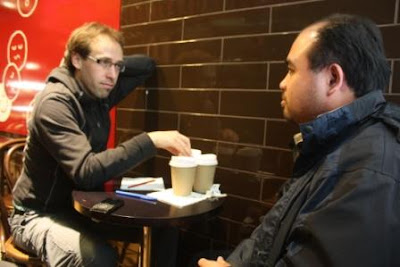 The first idea for this film came to me when I was riding on Elwood beach. I’ve got a very spatial approach to writing, and most of my stories have been born from a particular space structure and the constraints it generates.

There’s a round public toilet there there, down from the hill with a white watch-tower on top. It’s lit up by a single high halogen lamp, and looks exactly like a painting by Edward Hopper. I went there often, and always wanted to see it in a movie. I came up with the beat story – mostly, it was just a desire to see a Cow Boy standing under the halogen. I talked to Nghi about it, he liked it, and we decided, let’s do it.

But we needed a place that was functional to shoot, and the toilet in Elwood was too small inside. No room to put a camera, two men dancing, a generator, lighting, and a couple of helping crewmembers. 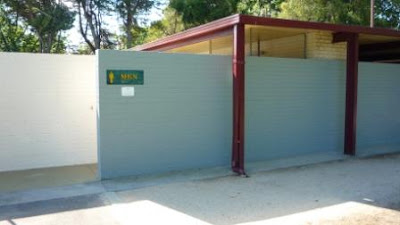 A mad exploration of male public toilets in Melbourne started. A friend mentioned one at the skate-park, in the Alexandra Gardens. I went, I saw, I loved. I even started calculating angles. But when I took Nghi and Joy there one evening, there were skaters in the skate park, and loud music around, and heaps of people passing. It was a no.

‘Location scouting is an art form in itself’, would later say Nick. I was on the look-out again. Things you discover: there’s an online map of Australian public toilets. A great initiative, I thought, except it’s got no photos attached – damn, this wasn’t made for film-makers, or beat-strollers. I got an idea, though, where to look. I had a stroll along the beach all the way from St Kilda to Port Melbourne, and two blocks qualified. 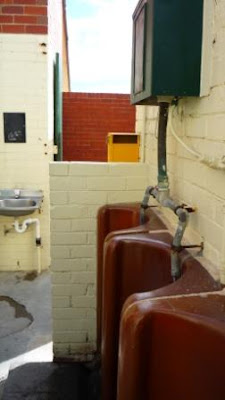 The first was at the South Melbourne Life Saving Club, one block west of Victoria Street: a beautiful art deco block, with dark brown urinals, an open roof, and warm red bricks. The other one was further West, at the Port Melbourne Life-saving club, opposite Jonhston street. It was less iconic, but it was bigger, had a solid roof, and would be more convenient for cameras and lighting.

I took Nghi and Joy there, to make a decision. We took the 109 down to Station Pier, checked out both of them, had fish and chips on the beach at sunset, checked out again at night, and selected the more convenient one. I mourned a little bit – I had been toying with quirky shots in the deco block. But now, I’ve embraced our location. It’s got wonderful quirky doors, a nice yellow tint, and heaps of space for proper dancing. 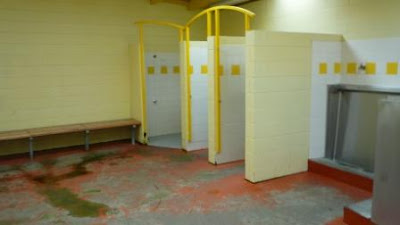