I remember talking to a fabulous indigenous photographer called Darren Siwes in Adelaide about four years ago, when I was doing research for a documentary film on ghosts in Australia. Darren creates these eery night-time landscapes, using a simple double exposure technique: he sets his tripod somewhere – usually framing some sort of suburban landscape – opens the lid for a while, then covers it, goes to stand in the picture, and has someone lift the lid again. This way, his body is captured on the film for only half of the exposure time, and appears as a fleeting indigenous presence, hovering above an everyday suburban setting: simple, powerful. He made me realize, in very concrete terms, that photography consisted in capturing reflected light on film. I hadn’t quite realized until Honey Pot that cinema was the same, and that you needed lighting to make things appear. 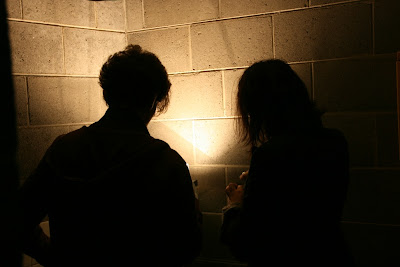 I had delegated the lighting entirely to Joy, but all of the people she contacted to act as gaffer fell through. Then a friend from work directed me to Mitch, a French editor and cinematographer who was on a working holiday visa in Melbourne. I contacted Mitch and his friend Gwladys, asking them if they’d be available to help. Mitch was very French in his attitude – suspicious as first, and then very warm when he got to know me better and saw the project was solid. He was professional throughout.
But I never thought it would involved so much. Mitch came to my place the day before shooting to check the lights we had from Huu. There were two spiral economy bulbs, one powerful halogen type, and a little dedo battery powered light. Mitch was concerned: the spiral economy bulbs had bluish light, the halogen was yellow. “You want stable whites”, he repeated, “otherwise you can’t edit properly.” I didn’t know anything about a stable white, but I got the general idea. You can change the colouring on computer, add a bit of red, diminish the blues. But all frames need to be lit evenly, especially in terms of colour balance; otherwise, it’s endless work. 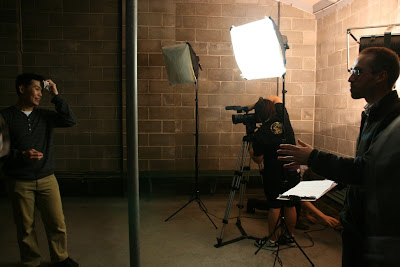 The way to deal with a set of mismatching coloured lights is the same as making white hair even – cover yellow with blue, and vice-versa. We only had to find some type of yellow gels or material for the spiral lights, and a light blue fabric for the halogen. Except it was Good Friday, and all shops were closed. On shooting day though – Saturday – I had a lucky strike. I was looking for dark felt to cover a wall corner, in case the actors tripped over and banged their head. I didn’t really know where to find it, but there’s a big craft shop in a gallery below my apartment, so I tried it. Lucky me: they were selling fabric, and they had rolls of light cotton muslin in all kinds of shades. I got a cut of pale blue and two cuts of pale canary yellow; back home, I tried holding them over the lights – it worked, it balanced off the colours, and made a beautiful even white.
On shooting day though, fixing the lights ended up being the most time-consuming activity. The municipal neons were definitely not enough, we needed more if we wanted our film to be more than a grey cloud. 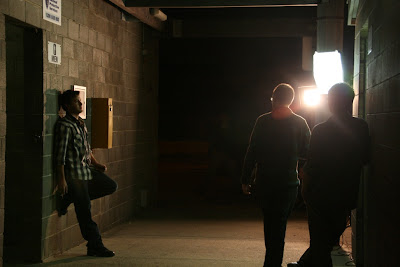 When I studied history of art, ages ago, I remember writing a paper on light sources in Vermeer and Rubens. How precise it was, how calculated, how meaningful. But there were different constraints here. We needed to see something, the lights had bulky stands under them, and they couldn’t be in the frame. So we moved them around after almost every shot, trying to bounce them off walls at least, hoping to create an illusion that it was all ambient lighting. So much I hadn’t planned. Hopefully, when all is edited, it won’t show too much. 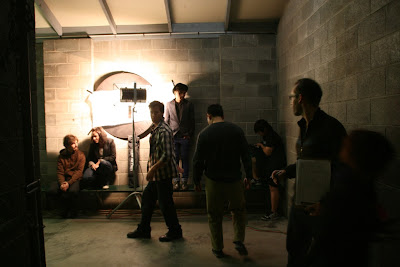