This was my first ever day of directing a film. It was beautiful, but intense. I’m used to writing books, which is a very different type of activity; you’re alone for most of the time, self-reliant. This first shooting was an eye-opener the collaborative nature of cinema. 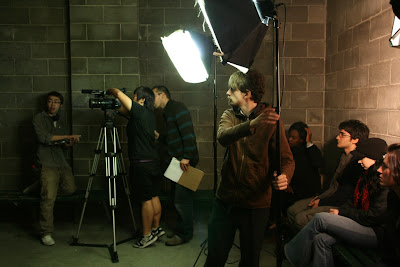 Collaboration sounds beautiful, but it’s always threatening to degenerate into chaos; and as director, I was the main person in charge of imposing order on the set. Not that I disliked the task. But it was the first time in my life that I had to ask someone to get me water, because I didn’t have time to get it myself. 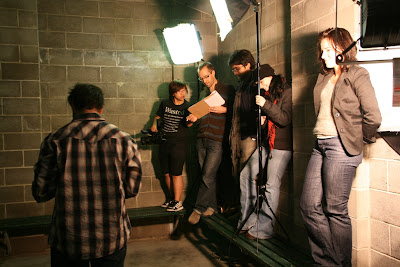 Fourteen people were there. Some had very clearly defined roles: Nick and Matthew were acting, Jamila was fixing their make-up, Joy was behind the camera with Ivan assisting her, Mitch was setting up the lights with help from Gwladys, and Joe was outside doing security. But other people’s tasks were much less clearly defined: Nghi was coordinating the set – basically, that meant I turned to him whenever I wanted something, and he somehow made it happen; Naomi and Flic were watching over choreography and costumes, but also helped lift cables or bring water to people; Rena, Julian and Amir had come to help, and found themselves scrubbing the toilet or carrying packs around as soon as the picnic finished. 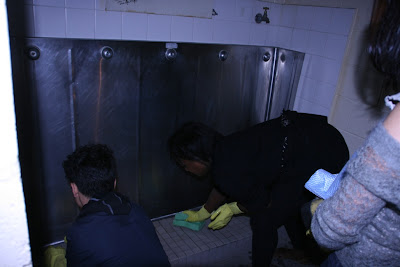 The four something hours of shooting themselves passed in a flash. Before I realized, it was over, the urinal scene was shot, half of the dance sequence was in the box, it was 11h15, and we had to pack everything out. Something was released, a tension that had been building for the last month or so. I laughed, a long, liberating nervous laughter, that had everyone turn to me. I was light-headed, dizzy, couldn’t really think straight, and in the end, I sat watching the crew pack up everything, listening to the sound of the waves, and smiling.