I have spent quite a bit of time working on the choreography for film. This has involved story-boarding movements, looking into music and tempos and taking traditional Tango movements and working out how to adapt them for people that have not performed Tango before. Involved in this is creating movement that does not look specifically like dancing the whole time- rather stylised movement and fighting that just draws on the Tango and other passion based dances.

It is always interesting choreographing as it is visualised in the mind and then applying it means being able to adjust it in the moment and upon request. 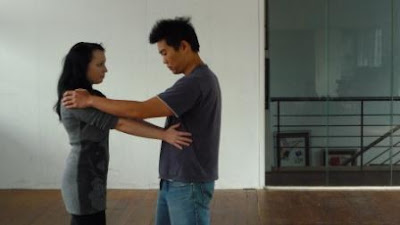 Working with Nick and Matthew has been a lot of fun. The first rehearsal was a fairly short and so we only covered a small amount of movement, but I was extremely impressed by the enthusiasm shown by them. A good attitude always makes it easier to teach. The second rehearsal was a full length rehearsal held in a dance studio in Prahran. Both of the actors were very switched on and involved and we managed to move quite far ahead in the choreography. Julien, the Director had a few ideas for movements and intentions and I worked with the actors to include these on the spot and it worked very well.

In this rehearsal we covered some much more complicated movement and I made sure to pull the actors aside and teach them how to safely move so that the next section of choreography would not be too dangerous to them. They have adapted to it so well and I think we are all having a lot of fun as it comes together. The feedback so far has been great too which is always a good sign.

The next rehearsal is going to cover some very intricate foot work and so I expect that it may be a bigger challenge than anything else the actors have faced in movement so far. I am looking forward to it as this next section is leading to the "crescendo" of the dance too. We are well on our way to completion.