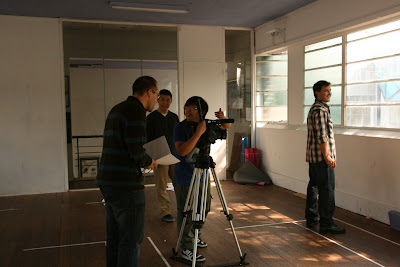 Nghi had insisted that we needed a dress rehearsal. He wanted Joy to rent the actual camera so she could play with it, and wanted us to run through the whole film in the studio. I wasn’t convinced, but let him have his way – he’s funding the film after all.

He was right. It was immensely useful. The main thing I learnt was how long everything takes. I had imagined, naively, that lifting and putting down a tripod was somehow instantaneous. It’s not. Even if it was always clear, when I say up, that I mean tripod up, not angle up, it would still be a slow process. Joy will have a camera assistant, but still, I know that now, we need to plan ahead, for every shot, take a few minutes only to set up camera.

The other good thing we learnt is how good the actors are. Everything went smooth, dance, urinal scene, final scene, and even the first scene. Nghi put together a rough edit of the rehearsal, I’ve shown it around a bit. I think it looks good, and it’s a real encouragement for the last stretch.