Today, we rehearsed the urinal scene, and I focused on the spatial setting, giving Nick and Matthew simple indications about how the toilet is structured – the urinal block, very confined, like a trap; an intermediary space, to dance in, and outside, the big open air, the beach, and the sea. I told the story spatially: Nick, you’re attracted to Matthew, who’s bringing you to the trap; but when he’s flashing his police card, he's threatening to actually restrict your freedom, confining you to such a small space; then you realize that what you really want is freedom, a wide space to move as you will; so you try to go out; however, something in you resists, a desire for Matthew. So you’re hovering, in that intermediary space, and that’s what the dance is about, half-restricted movement, you suspended in-between those conflicting desires. 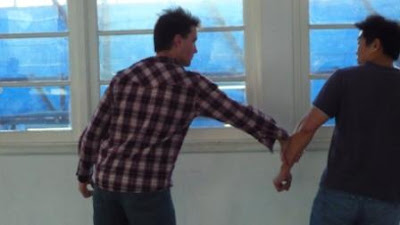 So Nick’s character is after freedom – that’s what he wants, and he comes to realize when he thinks he’s about to lose it.It's the story of a guy who understands the value of freedom, and experiences freedom as movement - that's what the dance symbolizes. But how about Matthew's character? Today, I realized one thing about him – he embodies gravity. Nick is fighting against gravity, trying to move more freely, dance, jump, even fly. Matthew brings him down, ties him to the ground. But how potent, how - attractive - is a body that's all gravity! There's one stage in the dance, when Matthew does that, spontaneously: in the first twenty seconds or so, he tries to get over Nick, to push him down. But then, he changes strategy, goes below him, and pulls him down, trying to make him trip over. Till, in the end, falling down, he brings him down with him. The final fall is the natural outcome for Matthew's character; Nick resisting - leaving - is his ultimate act of freedom.